How to Dockerize a Database

What you'll get out of this article:

This article is for you if:

The power of Docker really clicked for me once I started applying it to my own projects. No more long hours googling for all the dependencies I needed to run my apps. I could spin up any project from scratch with 100% confidence that it would run as expected, even if I was on another computer.

Today we're going to create a "dockerized" PostgreSQL database — that is, a database that has been containerized with Docker. We're choosing PostgreSQL because it's a solid all-around relational database, as well as one of the most popular.

Why Do You Need to Know This?

If you're generally familiar with Docker and its benefits, feel free to skip to the first method for dockerizing a database.

You might be wondering why you would want to dockerize a database. Why not just spin up a local instance, or create one in the cloud using AWS's RDS service or another managed database service like ElephantSQL.

If you're deploying a project to production, I can all but guarantee that you won't use Docker for your database. Instead, you'll likely use a cloud-based solution like AWS's RDS (Relational Database Service). It's more scaleable, and you'll be able to focus on your app, not database management.

Hold on - if we don't need to dockerize our databases in production, then why are we even talking about this topic?

Because dockerizing your database is an incredibly useful step in development.

If you're starting to develop an app, or if you just want to practice SQL in an authentic environment, using Docker to build your database is a great solution.

Don't believe me? Let's compare it to a few other solutions.

Let's learn two different ways you can spin up a Docker container running a Postgres database.

Reminder: Before running any Docker commands, make sure Docker Desktop (or your preferred Docker software) is installed and running on your machine!

Spin up a Database With Docker Compose

For this lesson, we'll use Docker Compose, since it's what you'll often use to integrate a database into a Dockerized app.

If you're unfamiliar with Docker Compose, you can check out this handy overview in the Docker docs, or just read my quick explanation below.

Docker Compose is a tool used to define and run multi-container applications. It's configured through a docker-compose.yml file. Plain old Docker, on the other hand, uses a Dockerfile. But how exactly does Docker Compose differ from regular Docker?

However, in development, you won't always want to connect to a scalable database in the cloud. This is particularly true if you're developing a proof of concept, or if you're working on a smaller-scale project like an API for a personal site. In cases like these, you'll supplement your Dockerfile with a docker-compose.yml that defines the architecture of your project.

Going back to our above example, if your Dockerfile already specifies the setup instructions for a Node server, you could create a Docker Compose file to do the following :

Here's an example of a Django API I built when I was originally planning my blog. Inside the docker-compose.yml I define how to set up the Django API as well as an additional Postgres database. Feel free to check it out. (I didn't end up using it, but the functionality is sound!)

Since we only want to build a database, and not an app to connect it to, we're going to skip the Dockerfile and go straight to Docker Compose.

That's right - all we need is a single docker-compose.yml file, where we define the database we want Docker Compose to spin up.

Inside an empty folder, create a file called docker-compose.yml and type the following:

Great, our Docker Compose file is all ready to go. Let's use it to build a database.

Open your terminal, cd into the directory with your docker-compose.yml file, and run the following command:

(You can omit the -d flag if you want. It just tells the container to run in "detatched" mode, or in the background.)

Our database is running! The last step is to interact with it.

Feel free to use a visual database tool like DBeaver or pgAdmin to work with your database. You could also interact directly with the container using the docker exec command.

I'm going to use the terminal command psql, which lets me interact with Postgres databases directly through the command line.

With this command we tell psql that we want to connect to the Postgres database located at port 5432 on our machine (localhost), and that we're logging in as the user named postgres (or whatever name you specified in your Docker Compose file).

Enter the password you specified in your file. And we're in!

I won't walk you through how to build your database since this isn't a SQL lesson, and since you're reading a lesson on how to Dockerize your database, there's a good chance that you already know how to do this!

There's a bit to digest here, especially if this is your first time working with Docker Compose.

However, the Docker Compose format is quite straightforward once you've internalized its terminology.

The only parts of this file that aren't absolutely necessary are the two volumes fields:

By including them, we allocate some space inside the host system (i.e. your machine) to store data that will be used by the container. This will let us persist data, like a table full of usernames and passwords, even after you stop your container and start again. While not essential, it's definitely convenient if you don't want to repopulate your data everytime you boot up your database!

Note: you could absolutely use a Dockerfile to set up a database, particularly if none of the images available on Docker Hub suits your needs. There's a tutorial in the Docker docs that shows you how to do just that. However, the postgres:13.2-alpine image suits our needs, so there's

We've just spent a while going over how to deliberately set up a database using a Docker Compose file. But what if you want a quick and dirty way to spin up a database in a Docker container?

If you read closely, you'll notice that we're including essentially all the information we used in our docker-compose.yml file. We aren't including environmental variables, but we could by using the -e flag, e.g. -e POSTGRES_PASSWORD=pass.

Let's take this a step further and use our terminal to access the container's own command line. We're going to use the docker exec command, which I very briefly mentioned in the previous section.

If you ran this successfully, you should see something like this in response.

You're inside the container! Now just run one more command:

Now, the moment we've been waiting for:

We're exactly where we were at the end of the previous section!

So why did we spend so much time going over the Docker Compose method if we could just use a one-liner?

Well, the biggest downside of squishing everything into a single docker run command is that we loose the ability to easily integrate it into a multi-container setup, which Docker Compose is built for.

If you want to practice running some SQL commands, this one-liner is probably enough. But if you're setting up a database that you want to connect to a project in development, Docker Compose is your friend.

In this post we've learned a couple of ways to dockerize a database:

In addition, we've learned why Docker Compose is such a great tool for developing apps that require outside dependencies like databases. If we're developing a Node server, we can use Docker Compose to containerize the server and also create a database for us to test the app with. 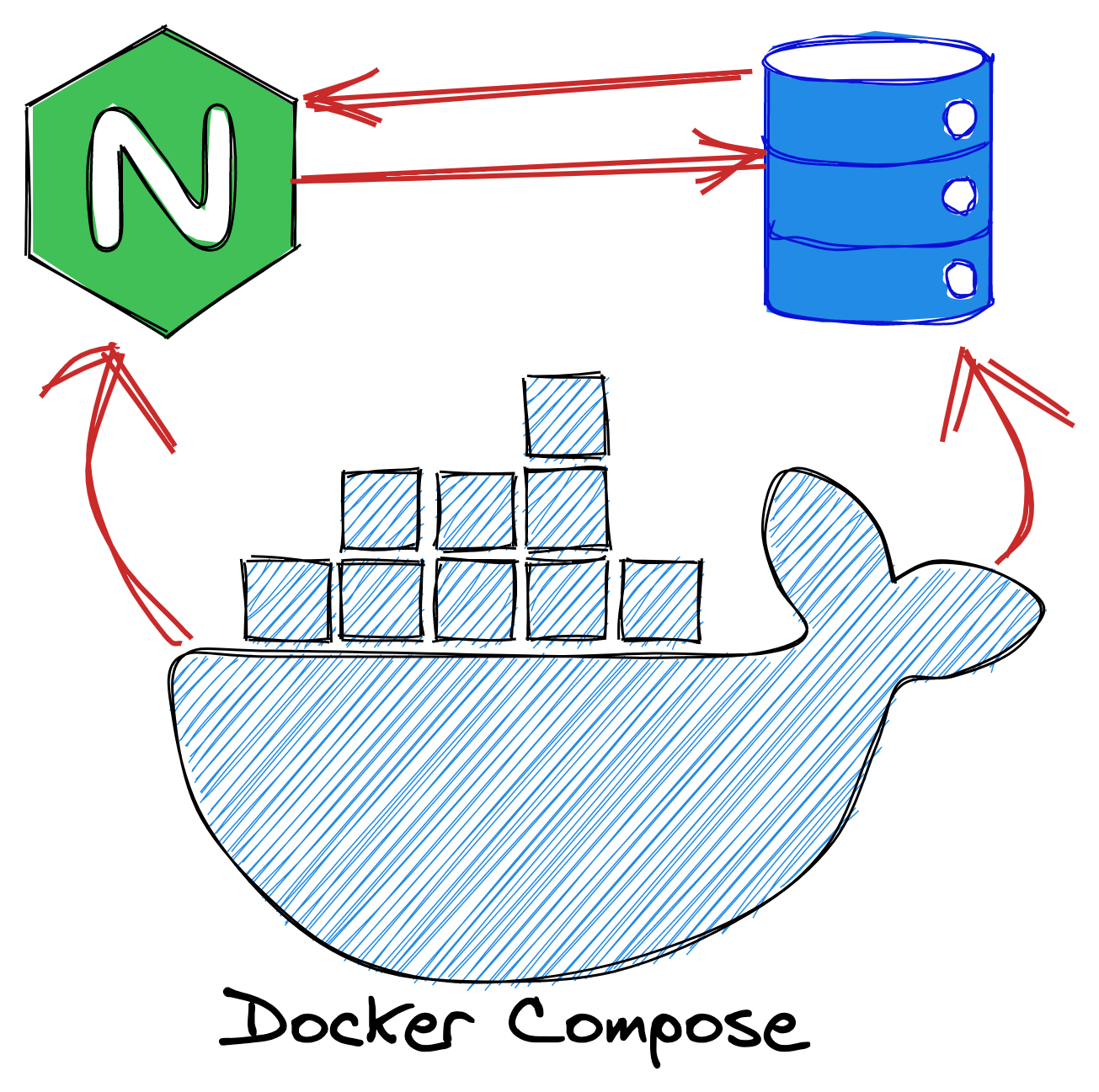 Now that you're familiar with how to run a PostgreSQL database with Docker, here are some suggestions for how to expand your knowledge.

What if you wanted to work with MySQL instead of Postgres? Or MongoDB? Try modifying your Docker Compose file to work for an image of a different database.

(Pro tip: Choose an alpine image, as these tend to be the most minimal and take up the smallest amount of space.)

Take an app that you've worked on, and use Docker Compose to containerize it. This app should contain multiple containers, or "services," such as...

This will require some more research into Dockerfiles and Docker Compose, but it will make you much more comfortable with Docker as a whole.